GAMERANGER
I installed it and hosted a few games successfully. It's free. There are about 17-27 rooms up at any time, it seems. There is a Game Ranger AOE club on Facebook. (https://www.facebook.com/groups/125311717561893)
In Gameranger you can play with UPatch on ROR if you and your friend both have ROR 1.1.(ie. the UPatch). When you load up the game in Game Ranger, it will say next to the Player's information (eg. Civ) what version they have, including "1.1", ie. the UPatch. If you know how to backup, move and copy your EMPIRESX.EXE files in your Age or Empires folder, you can switch between different versions of ROR because Gameranger automatically loads up whichever one you have as the default, ie. the file in your AOE folder saying EMPIRES.EXE.

Voobly
I installed it and hosted games. It's free. It installs ROR 1.0a on your computer, which is nice because it has 200+ population limits. Typically, the AOEI room seems to have 20-30 users and the ROR room has 4-7. But maybe 80% of the people are away or in games or just want to do DMs, so most don't acknowledge or accept my offers to play Custom Scenarios, which are my favorite. I read that in Voobly you need ROR 1.0 or 1.0A, which means that you can't use UPATCH.

Gametv Plus
https://plus.gtv.vn/
It is in Vietnamese but it has an option for English that might be in development. See Bichho's description later in this thread.

Kali
Their website still works and has AOE, but I'm not sure about AOE ROR. (http://www.kali.net/default.asp) I installed their program and a message said that they emailed me a code "0 minutes ago" to register to make my program work... but I haven't gotten it yet, and it's been awhile. I used a different email and tried again and still haven't gotten anything.

AGSM
The AGSM website works and mentions AOE1 but not ROR (http://www.agsm.net/games.php). The review on the other thread said: "This is a freeware platform to play I found 2 months ago, I don't really know how it works but it looks interesting." I installed it. It has a box saying LAN and INET. But it's not like a normal game server. The program must be a way to connect to other people whose information you already know to play via LAN.

SXPORT - https://puffinsoft.com/
The review said: "This is an old platform but useful for people who still uses it." When I ran the Program, it has a box for Start Port, and one for End Port. But that is it. There are no servers.

Hamachi
Hamachi's website works, but it is $49/year, looks a bit confusing and I don't notice AOE being listed prominently on it (https://www.vpn.net).

Garena.com
It doesn't have AOE listed among its PC Games. I installed it, but couldn't find a way to play AOE on it. It looks like Garena had a makeover and focuses on a more limited number of games.

With Definitive Edition we also have Microsofts Store and Steam. I only use these nowadays. Used to play a lot on GameRanger back in 2007 to 2012 maybe?

I played with 4 other players and 1 had a lag problem and told me this. Having 3 AIs on that map crashed it with lag, and the lagging person told me that this was also his experience playing with 1 other Humans and 3 AIs.

On the same day, I played with another Human in a 3 v 3 map with 4 AIs. I don't know what his connection strength was, but the game crashed 12 minutes in and 2 of the 4 AIs didn't make more than 4 villagers and were stuck.

However, in the day's beginning I played with a friend whom I know has a good connection like I do and we beat 4 AIs on the "Ctesiphon" Co-op scenario that is a remake from the Pax ROmana Campaign.

posted 12-14-20 00:18 AM ET (US)     3 / 9
For Gameranger, How do I allow "late joiners"? The box for it is greyed out when I try to host and that goes for other players who host also. The problem is that sometimes a player could get accidentally ejected from a game. Plus, in custom scenarios sometimes players need to leave and rejoin.

posted 12-15-20 01:22 PM ET (US)     4 / 9
Yeah AoE does not support late joining (how would that possibly work, joiners overtaking an AI civ?), the box is there as a part of the interface, it is greyed out because the specific game doesn't allow for it.
//The warrior of Isola

It have big community and have ranking system which match players with same level.
Ranking look like this, so you will match with players have same ELO as you. 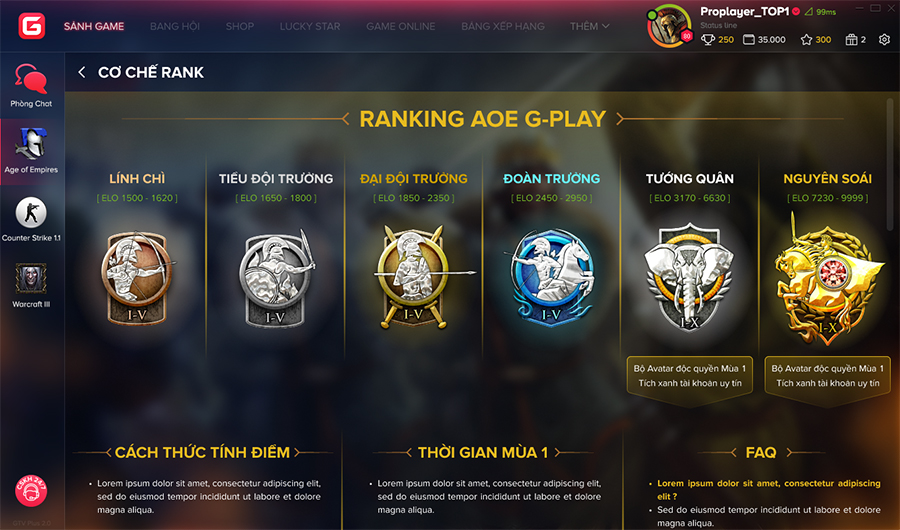 Clear frustrate when match with an opponent much stronger than you, and play in big AOE I community.

posted 09-21-21 08:17 AM ET (US)     9 / 9
Stickied. Unstickied the older posts with places to play multiplayer, this one is much more up to date. Thank you rakovsky!
The Heavenly Escort • Night of the Dragon • Corlis (DE) • Dark Forest 2v2 (DE) • New Random Maps • Night Mode • Lengthen Combat Mode • The Big Hill • 512x512, 768x768, 1024x1024 map sizes • All Map Sizes • All Map Sizes (AoK) • BTI Soundtrack
Age of Empires Heaven » Forums » AoE Multiplayer Forum » A Review of Available Multiplayer Platforms/Servers for AOE1 and ROR
Top
You must be logged in to post messages.
Please login or register
Age of Empires Heaven | HeavenGames