posted 09-01-16 03:12 PM ET (US)
The expansion is looking promising, we are steadily doing our own part at our own pace and have made (and not made) multiple decisions regarding the expansion. Wish us luck, if you would be so kind.

Hurdles:
Turtle Pack Glitch, when two darkest player colours do not change player colour
Anything that is hard coded.

Notice
I would ask that people on the team would refrain from publicly sharing what the new content is in the expansion for now.

Job List:
Epd999: Data editor, Death Match AI maker
Phatfish: Soundtrack, UI
yohomes2: Modeling & Post processing
Todler: Modeling & Post processing
Chab: Software editor
Mystery Man: ...
♚Lost Empires Mod♛
Maybe it's only a fool who'll perilously journey out to what might not be there. But if you want to solve problems, you don't just solve the ones that are there, you find more and make more and go after the impossible ones.
The neanderthals never ventured into the unknown and they went extinct, so who are the fools?

posted 10-25-18 11:40 AM ET (US)     226 / 302
Aran you can think about new units, techs, etc, that can be useful for future mods, or future versions.
As for civs/strategies, it depends on what you are searching for.
If you just want different civs, it's already possible to run games with randomly-generated civs and/or strategies.
If you're searching for something more specific, then it needs more work... But at some point it will be difficult to continue adding civs that still make sense

posted 10-26-18 01:55 PM ET (US)     227 / 302
I know Chab. It will takes years. There are games much older than AOE and modyfication gave them new life. As fans we can only wait and be patient. About Civilization or units I'm not worried. There is plenty possibilities

. I waiting for proper fanmade Expansion by specialists. Yes, I could learn create myself some Civs, but it wont have soul of AOE

I can only give some suggestions.

I was thinking about new buildings

Harbour- It would be for creating non military units. It would be give more space in the future for new naval units.

Defense Office- It would take from granary all defensive techs

Blacksmith - All techs from Storage pit

Commander Centre- You can buy in here General or Admiral

posted 10-31-18 03:45 AM ET (US)     230 / 302
who thinks some older civilisations need to be rebalanced to better reflect what they actually famous for.
For instance the Persians were never really that big on war elephants with the Sassanids being the only Persian Dynasty that used elphants in considerable numbers. It was the Indian and other south east asian civilisations who used war elephants in huge numbers. King Porus of Pauravas despite being the ruler of a minor kingdom was able to muster up to 30,000 foot infantry, 4,000 horsemen, 300 charioteers, and 200 elephants. The Nanda Empire the most powerful of the Indian Kingdoms at the time when Alexander the Great would have been invading Indian, would have been able to field at least 200,000 infantry, 20,000 cavalry, 2,000 war chariots and 3,000 war elephants. I think one of the new Indian and South East Asian civilisations would be better off with the bonus to war elephant speed.

posted 11-11-18 03:29 AM ET (US)     232 / 302
knightse72- I was thinking that Indian countrys could have bonuses for faster taming, armour, attack speed, attack, range etc. Cataphracts are much inferior too War Elephants. In the history there were many civilizations which used Cataphracts. Scytians, Sarmantians, Parthians and Bizantium etc. Speed bonus WE for Persian is main force for them.

@Aran & knightse72, we feel that it's best to stick as close to the original game as possible while giving it a new breath of fresh air. As many historical inaccuracies AoE has, we will likely not be changing the already existing civilisation bonuses or changing the game too heavily. However, if you have any suggestions for the new civilisations, we'd be happy to hear them.
♚Lost Empires Mod♛
Maybe it's only a fool who'll perilously journey out to what might not be there. But if you want to solve problems, you don't just solve the ones that are there, you find more and make more and go after the impossible ones.
The neanderthals never ventured into the unknown and they went extinct, so who are the fools?

posted 12-03-18 05:47 AM ET (US)     236 / 302
The news about this new expansion (beyond indus), by the way will only come with the project completed. I ask the organizers if they intend to present this expansion to the producers of "Age Of Empires: Definitive Edition"? For to add units, civilizations, and desiner proper to these Indian civilizations was incredible. So it was with the Forgotten Empires, which began as a mod and became a new expansion, a precursor to others. I would love to see the expansion created by you become an HD expansion. You guys look the same.

I got to this site by chance - was trying to make a mod for Heroes of Might and Magic, which will also have Hindu \ vedic theme. Actually, my spiritual master wants that we make computer game based on Mahabharata (you know, it is about Krishna, Arjuna, great Kurukshetra war around 5000 years ago, and after it one indian kind - Yuddhishthira and later Parikhit ruled whle planet Earth, well according to His Divine Grace A C Bhaktivedanta Swami Prabhupada, founder of ISKCON).

So, I was reading Mahabharata for around half year, and read till end of war, whn Bhima defeated Duryodhana. I made a big list of events in game: who killed\defeated whom. There are around thousand of lines\headers (with pages for each - refering to the scripture).

So I was trying to make a game based on Mahabharata in Unity3d game engine. I have SharpNLP library, which can analyze English sentences, - make part-of-speech-tagging etc. So the result of that program is converted to file, which I open in Unity game engine, and that is to be used to make game levels.

For example, "Arjuna killed 30000000 demons". This sentence should generate a level with Arjuna (I have to play him), and enemies - 30 millions of demons (in Russina versioon it is written 300 millions). Sl I decided that Heroes of Hight and Magic is more suitable to make such game, as I can simply make unit "demon", and simply have a number of such demons written nearby, which will reduce if Arjuna will slowly kill demons one by one (actually he can kill thousands at once).

As for Mahabharata itself, there are 4 main kinds of units are used (as I've read). It is similar to chess. Chess game comes from Chaturanga - indian game, which is also based on Mahabharata. Chatru means 4, and anga - means "legions" (in this conext).

So these 4 units are:
- simple soldiers with different weapons (I've got a list on inventories for each hero in Mahabharata, and I can share if you want). In chess game it is a pawn
- soldier on horse. in chess it is knight
- soldier on elephant. That's "bishop" of chess
- and soldier on chariot - with several horses. that's rook of chess.

So, I was thinking of making a mod in Heroes, but as it lacks these units on horses, elephants, chariots - I started googling - where can I get sprites from? (I like Heroes of Might and Magic 3.5 - there are programs for modding it). So, I found that Age of Empires has such units! ;-)

THis is long story, sorry for it. But I'ld like to know how are you going to make this mod? How do you make maps? Are going to make new heroes (like arjuna, Duryodhana - for Kurukshetra war), new units?

Basicly, I'ld like to get sprites from Age of Empires and put them as new creatures into Heroes of M&M 3.5. Or maybe just take warriors from Heroes - and put into Age of Empires. If that's at all possible.

Aim is to make a game (mod) with Mahabharata and Ramayana themes. These two stories are most important in "hinduism" as related with greatest avatars - Krishna and Rama. Another spiritual master (in ISKCON) wanted to make a game on Ramayana, and gives all blessings for anyone who wants to do this.

Long story short, if you're looking to extract graphic assets you should take a look at an SLP editor. If you are interested in AoE modding you should create your own thread in the future rather than fill this one with your personal queries.
//The warrior of Isola

posted 01-24-19 06:58 AM ET (US)     241 / 302
I do not say to reveal photos, they could just comment, like: we'll have a slinger upgrade, we'll have a slinger upgrade, or a new unit in the quarters, or else such a new technology, but without revealing the benefit it will bring. I also would like to know if there is any forecast to leave the beta?

posted 05-26-19 04:38 PM ET (US)     243 / 302
Good afternoon. No more news about expansion? The only thing planned so far to realize was an upgrade of Scout and Camel rider, which can be seen in the music archive of the new expansion. You could give some more details of this project. Or at least one date for the beta of the new expansion?

The progress on the expansion has been very slow due to several factors. However we still made great progress in the past months. You guys have probably heard of Pathfish' awesome music that he made for this mod. That music will also be included in this expansion. On top of that We recently finished all the buildings for the Indian building set and they are being added to the game. I have added a screenshot below so you can see what the Iron Age set looks like in-game.

There were a lot of people asking about what the mod will include. We are not yet near a point where we want to release all the information but we are working on a manual in the same style as the old Age of Empires and Rise of Rome manuals which will contain all the information about this expansion. 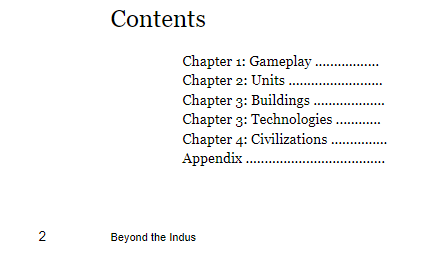 There is still a lot of work ahead of us and the release date will not be for soon but we hope to keep on working on this expansion until it's ready to be released. 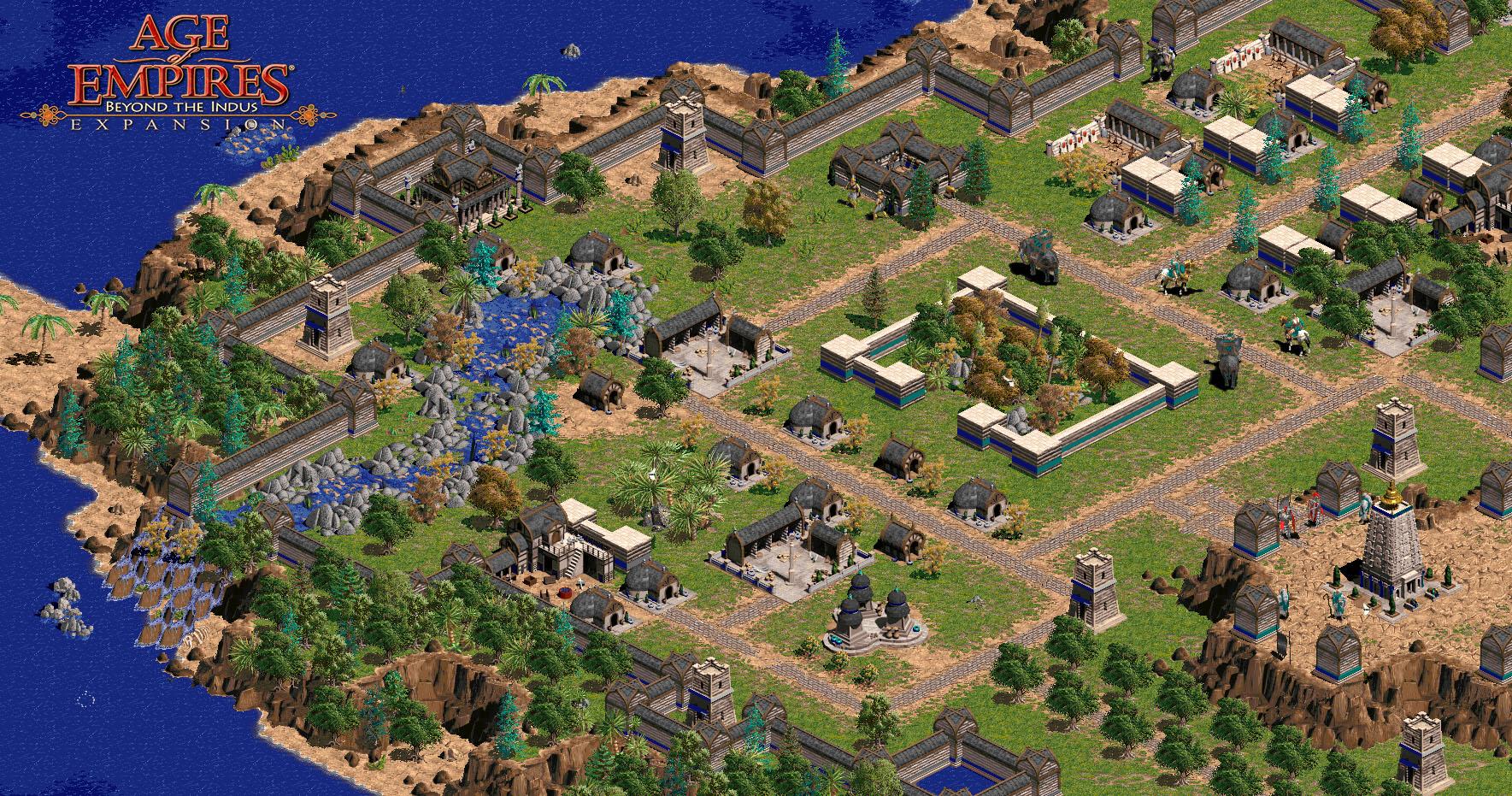 Credit to Andrea Rosa for his map design from Angkor Wat And The Khmer Legacy.

posted 08-03-19 08:27 AM ET (US)     249 / 302
Good Morning. I wonder if the project for expansion of age of empires beyond the indus is over? There was news that the site of age of empires Heaven will be closed. It would be sad to know that the project will die with the site. Sad to imagine that this project would have new units, campaigns and technologies, and we would never know what they are.